This website is intended as a hobby project by father and son Kenny and David Gifford, with the aim to photograph, identify and record the microscopic life in the freshwater lochs of the Shetland Islands. It is hoped that this website will be of interest for biological recording and monitoring, and to students of freshwater biology, anglers, naturalists, ecologists, as well as casual observers. The website is updated as a blog, with records photographed and added to the site after each loch visit.

Download a spreadsheet of the records identified* to species level:
shetland-lochs-records.csv (comma-separated values)

*Please note this is an amateur project. Best efforts are made to identify species. However this website and the spreadsheet linked above should not be relied on as a reference. Assistance with identifications and taxonomy is very much welcomed — please contact us.

When I was in my very early teens I was introduced to microscopy and freshwater invertebrate life by a school violin teacher by the name of Geoffrey De Mercado. I also became owner of a Watson and Sons brass microscope and like many other young people I was fascinated by the microscopic world. Geoffrey de Mercado went on in his later years to produce a booklet ‘Notes on Shetland freshwater life and arthropods’ … an informative and interesting book illustrated in time-honoured fashion by his own line drawings.

In my latter working life I had the privilege to teach aquaculture (SQA National Progression Award in Aquaculture) to secondary school pupils.  Part of the course content consisted of field studies, involving gathering samples of plankton and data on water quality. Subsequent labwork involved the students identifying and photographing specimens and finally presenting their work in class.

When I retired I discussed a hobby project with my son David where we would visit freshwater lochs in Shetland on a regular basis and compile a database of photographs of species found.

Some work was done in Shetland by the Institute of Terrestrial Ecology for the Nature Conservancy Council during the late 60’s and early 70’s on listing freshwater invertebrates, macrophytes and water quality. The species found were listed in a report commissioned by Scottish Natural Heritage, compiled in 1995 by Dr Peter Maitland of the then Fish Conservation Centre in Stirling.

Some lochs were singled out in the report as being of importance. The Tingwall loch in particular was described as ‘one of the base rich Shetland lochs with rich and diverse flora and fauna’, and that it ‘must qualify as one of the important fresh waters of Shetland’. With this in mind it was decided we would concentrate our blog / database initially on compiling a photographic record of aquatic life of the Tingwall Loch, progressing to other lochs in the islands as time allows.

Shetland’s geographic remoteness and position lying between Norway, Scotland, Faroe and Iceland, makes variation in some species very probable. In addition the 1,577 lochs in Shetland are mostly unspoilt and unpolluted.  Many are in remote areas, a long way from any commercial developments.

Samples are generally obtained using a plankton net, towed either off the shore or from a boat. The nets used are regular small plankton nets from EFE & GB Nets with 20 - 50 micron mesh. A simple pock dip net has also been used for larger aquatic stages of flies, small fish, and beetles. Samples are washed into 750 ml plastic bottles and taken back live to the ‘lab’ for photographing and identification. Another sampling method is to take a quantity of sphagnum moss from around the loch and squeeze the water content into a suitable container. The findings from this method work well for the likes of desmids.

Chemicals used to aid with examination include Lugol’s iodine, isopropyl alcohol, and formalin (at 4% concentration).

A student-level biological trinocular microscope was used at the start of the project and replaced in July 2020 with an Olympus CX43. 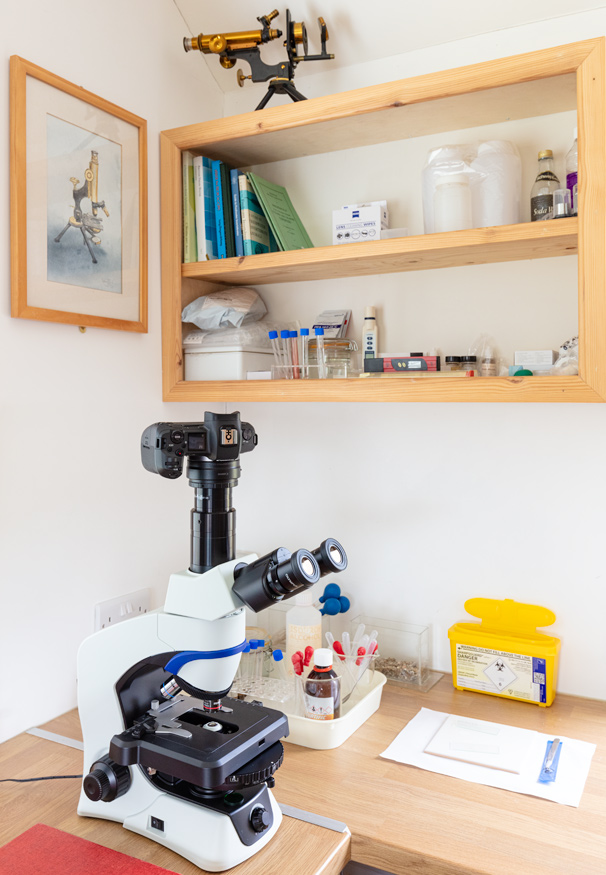 The microscopy subjects on the site have been photographed using various Canon DSLR and mirrorless cameras mounted to the microscope. The photos are processed and filed using Adobe Lightroom.  Focus stacking (Zerene stacker) has also been used to generate many of the images and Toupview software to make mesurements.

Thanks to Bill Brierley of the Freshwater Biological Association in Windermere. The importance of getting species’ names correct is high on the agenda so with that in mind I visited the FBA at Windermere and met with Director Bill Brierley who very kindly took time to show us around and discussed ways we could be helped in dealing with taxonomy questions. That process is paying off with very good contacts for example Chris Carter who has been a huge help with Desmids. Thanks also to Tony Pattinson, member of the Quekett microscopy club, for help  with identification.

And thanks also to the Aquaculture training staff at the NAFC Marine Centre in Salloway who have offered their boundless advice, encouragement and coffee!

Elliott, J. M. (2013). Contrasting dynamics from egg to adult in the life cycle of summer and overwintering generations of Baetis rhodani in a small stream. Freshwater Biology, 58(5), pp.866–879.

Website development by David Gifford.  Photos on the website are by Kenny and David Gifford.  For more landscape photos of Shetland, see David's photography website: www.davegifford.co.uk

Please note this is an amateur project. Best efforts are made to identify species. However this website should not be relied on as a reference. Assistance with identifications and taxonomy is very much welcomed — please contact us.